Edna Alvis, a resident at Brunelcare’s Deerhurst care home, has gone ‘viral’ on social media after her 105th birthday celebrations were recorded by BBC Radio Bristol.

On Thursday 15th April, the easing of lockdown restrictions allowed Edna to celebrate her 105th birthday with a small garden party at Deerhurst. Her party included flowers, cake and balloons, and she even received her second birthday card from the Queen.

BBC Radio Bristol joined in on the celebrations, recording the day to share on their social media channels. After posting the Edna’s story on Facebook, it was shared around the world and she has received over 4,000 birthday messages – including from the USA, Australia, and Nigeria!

One well-wisher said: “Happy birthday. What’s your secret? You don’t even look 90”. Edna revealed that the secret to staying young is ‘having a great family and a sherry on a Sunday’. Edna has enjoyed reading all of the comments, and is overwhelmed by the number of birthday wishes she has received.

Lesley Hobbs, Manager at Deerhurst care home, said: “Edna is thrilled. She can’t believe all the attention it’s received but she is one very happy lady, and thoroughly enjoying the limelight.”

Edna moved into Deerhurst care home in 2018 after thinking she only had three weeks to live, but after receiving dedicated care she has now been enjoying her time at Brunelcare for three years. Edna said: “Here it’s been marvellous, I wouldn’t want to be anywhere else. They have been marvellous to all of us, we don’t want for anything.” 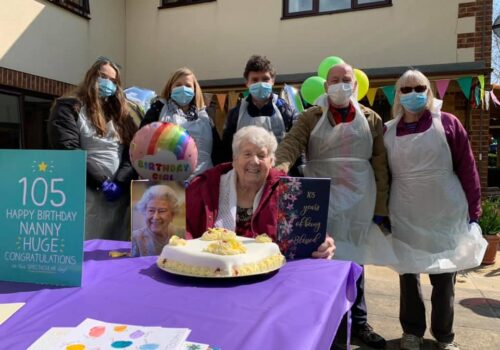