A 94-year-old resident of Home Meadow care home in Toft near Cambridge is making his mark on the home by creating useful ergonomic items for his fellow residents, using his own state-of-the-art 3D printer.

Former engineer John Downes moved to Home Meadow in May last year, having lived in Toft for almost 50 years. His wife is also a resident at the home. When he moved to Home Meadow, John was keen to continue his tech-based hobbies, so staff arranged for his 3D printer to be set-up in his room.

Since then, John has been making computer-modelled creations including a number of functional ergonomic items, which his fellow residents are able to use, including light pull cords, egg cups and ornaments.

Talking about his 3D creations, John Downes said: “I noticed that the light pull cords could be a little tricky to use; they were small and with some of the residents suffering with arthritis in their hands, they were difficult to grip.

I designed large, brightly coloured pulls for the light cords, making them easy to see and handle – some even glow in the dark. I also had some fun making egg cups for the residents and sourced a special plastic that could be painted, which I used to make miniature cats for residents to paint.”

John enjoyed a successful career as an electronic and optical engineering consultant, and along with two business partners, ran an engineering factory making machinery for the quartz industry. He also lived in Rome for eight years, where he worked as a technical director for an Italian engineering company.

Activities Coordinator Joe Ballard said, “My work at Home Meadow is all about enablement; helping our residents to do the things they have always enjoyed doing, the things they love, and John’s 3D modelling is a brilliant example of this.

“John is a highly intelligent, brilliant man, who loves to create things and find answers to problems, so he spends a lot of time designing and creating using his equipment. When he said he had some ideas for things he could make for residents, we were delighted and everyone at the home loves seeing his latest designs.

“The fact that John’s creations are bringing real benefits to the home is a bonus; he’s also planning some creations for Christmas and is already designing some decorations that our residents will be able to paint or personalise for their rooms. We can’t wait to see what he comes up with next!” 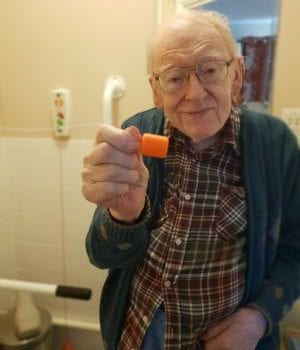