Residents, their relatives and staff at Connors House Residential Home were joined by guests, for the official opening of their revamped courtyard.

On Thursday 14th April, residents of the Craddock Road residential home spent the afternoon celebrating the opening of their new courtyard, with a number of guests including the Sheriff of Canterbury, local councilors, Trustees of Abbeyfield Kent, and their patron, Lady Anne-Marie Nelson.

Abbeyfield Kent Vice Chairman and link Trustee for Connors House, John Townend opened the event with a speech discussing the work that had taken place and what it would mean for the residents.

Following the speech, resident, Barbara Martin and home manager, Christine Devlin, cut the ribbon to the courtyard alongside Patron, Lady Anne-Marie Nelson, the Sheriff of Canterbury, Robert Jones and his escort, Joy Knock, declaring the courtyard officially open and ready for use.

As the sun was shining on perhaps the warmest day of the year, residents and their guests explored the courtyard and enjoyed some tea and cake, whilst listening to singer, Eliza Handley, who provided the entertainment.

Representatives from Arc Creative, who designed and formed the courtyard, were on hand to talk about what had been installed and why. All plants within the courtyard are edible, smell interesting or make a soothing sound, whilst the compressible slip resistant rubber floor makes it safe. The built in barbecue adds an element of community dining for the warmer months and the planted herbs have already been used in the meals the chef prepares for the residents. Arc also installed a large pergola, which will provide shade in the summer and will eventually have four types of grape covering its beams.

In his speech, John said: “Outside space is imperative for older people, particularly those with dementia. We hope the courtyard will provide a calm environment for our residents and be somewhere they can enjoy spending time.” 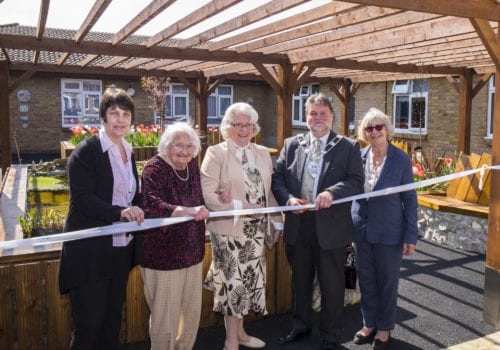