On 14th July 2016, The Royal Star & Garter Homes celebrated the one hundredth birthday of loved and respected resident Edith Bailey-Hunt – in the Charity’s own centennial year.

Edith, or ‘Belinda’ as she was nicknamed by wartime comrades, enjoyed her hundredth birthday party surrounded by seventy friends, residents and family members at the Charity’s Solihull Home, which cares for disabled veterans.

Belinda saw six years of wartime service in the Auxiliary Territorial Service. De-mobbed in summer 1946 as a Junior Commander, she described her war years (in the ATS Pay Corps) as among the happiest of her life. An extract from Belinda’s memoir recalls her enlistment. ‘On 5th July 1940, I joined the ATS. Hoping to surprise him with the news, I did not mention this to my father; but, what a shock! He was furious – and asked me to cancel. I could not agree: I did so want to be part of the war effort. I will never forget his face when I met him in my uniform: all was forgiven!’ 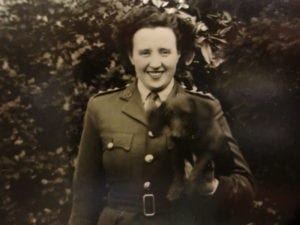 Cosmo Corfield, one of Belinda’s nephews, spoke of his aunt’s life story. He noted the extraordinary coincidence of Belinda’s one hundredth birthday, the Charity’s centennial year and the centenary of the first tank battle at Flers-Courcelette, part of the Somme offensive, in which Belinda’s father, Ernie Hunt, fought as part of ‘C’ Coy Heavy Section Machine Gun Corps. He was decorated after driving tank C6 (Cordon Rouge) into battle. As the so-called ‘cocktail crewmen’ of ‘C’-Company named their tanks after famous French wines and spirits beginning with the letter ‘C’, family guests toasted Belinda’s centenary with champagne flutes of G.H. Mumm ‘Cordon Rouge’.

Having expressed her astonishment at turning one hundred (“Good grief!”), Belinda commented: “I’ve been so lucky with the people I’ve met – and who have cared for me. I’ve had a wonderful life, absolutely wonderful!” 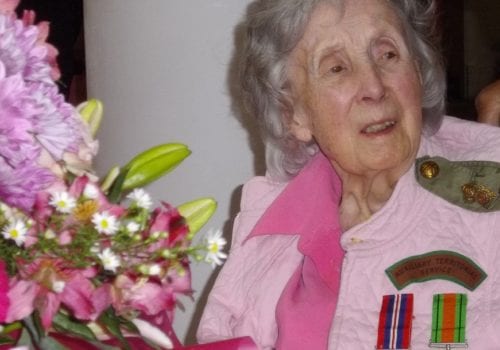