99-year old Jim and Betty Drury, 94, both residents at Fernside Hall Care Home in Halifax, West Yorkshire, got the giggles together when asked about romantic gestures to one another over the thirty-one years they have been married.

Whilst reminiscing over their old wedding album on Valentine’s Day, Jim joked frivolously, “I’ve tried my best with surprises for birthdays, Christmas, anniversaries, the lot – but Betty has always ended up giving the presents to one of her friends!”

It was strolling home from their local church hall in Bradshaw back in the 80s when Jim, who turns 100 in September this year, plucked up the courage to ask Betty on their first date. Born and raised in Illingworth, the pair had never lived far from one another and were married once before, so did not kindle their relationship until later in life.

Betty said “Jim approached me on the way back from church and asked me where I lived. A few hours later, I heard a knock at my door, and it was Jim inviting me out for a drink. We only went to our local, but it was love at first sight.”

After linking up at the Talbot Inn in Illingworth, the two became an item very quickly, sharing many fond memories and laughs together with friends at the historic Shakespeare pub in Halifax. It wasn’t long before Jim and Betty moved in together and started enjoying seaside trips to Scarborough and countryside getaways to Scotland.

What began as a budding romance led to the couple saying ‘I do’ at St Malachy Church in Halifax in 1989. Out of the blue, practical Yorkshireman Jim proposed with a simple, ‘Let’s just get married’, dropped into conversation. Although this caught Betty off guard, it worked a charm and she said – ‘YES!’ – in the same breath.

Both now residents at Fernside Hall Care Home, part of the wider Valorum Care Group, the two of them well and truly see their room there as a home from home and the team have helped fill it with pictures, memories and trinkets from holidays and their honeymoon in the Isle of Wight.

Hayley, Activity Coordinator at Fernside, who knows the pair as a dynamic duo, commented “Jim and Betty are like two peas in the pod. They often like their own space just the two of them and call their room here together their flat. They’re like a double act when they have the odd domestic, but you can tell they really love each other by how inseparable they are.”

Soon to reach the grand age of 100, Jim, said his secret to a long life is ‘One Guinness a day.’ Words of wisdom that followed were ‘Just take life as it comes and just be nice to each other.’ 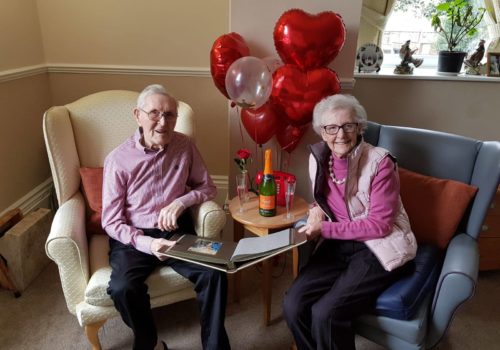