Dementia has been described as a global health ‘ticking time bomb’ by world-leading experts.

Dementia is where cancer, ‘the Big C’ was 30 years ago. ‘The Big D’ is where we are at now, according to two experts from the World Dementia Council.

Dementia has overtaken cardiovascular disease to become the biggest killer in England and Wales today. And surveys show it’s what people in the UK are most scared of. A YouGov poll* revealed 64% of people were most afraid of losing their memory through a health condition such as Alzheimer’s or dementia in their golden years.

But dementia is no longer the taboo topic it once was. People are talking more frankly about living with dementia than ever before. That’s thanks in part to the power of social media. It has made mass global conversations possible according to World Dementia Council members Jeremy Hughes, CEO of the UK Alzheimer’s Society and Paul Hogan, founder of global dementia care specialist Home Instead Senior Care.

So here are 5 things they want you to read and share across social media on #WorldAlzheimersDay to help start more conversations spanning the globe:

A 2017 pilot programme saw questions about Alzheimer’s and dementia included in NHS midlife health checks which start at 40. In the past, people had said there’s no point talking about these diseases at the midlife point because they happen in old age. But the results proved a shift in people’s attitude to modifiable dementia risk and managing their health; 75% of people said advice on dementia risk reduction would encourage them to adopt a healthier lifestyle.

So the ‘40-somethings’ in the pilot took on board the basic message that what’s good for your heart is good for your head – eat a healthy diet, take exercise, drink in moderation and don’t smoke. Currently there’s no cure for dementia, much more research is needed, so until then making such lifestyle tweaks from the age of 40, should be embraced as midlife best practice.

2. The right to an early diagnosis

Jeremy’s father lived with dementia, and as CEO of Alzheimer’s Society, he hasn’t met a single person who wished they hadn’t got a diagnosis, they say they wish they didn’t have dementia understandably.

If we don’t feel well, we want to know why and that’s just as true for people with dementia and their families, adds Paul, founder of Home Instead Senior Care. It’s only with a dementia diagnosis that informed decisions can start to be made. That means care and support can be carefully planned out with a person’s fundamental rights respected. The five Dementia Statements, honed over the last 7 years and newly published this year, are a rallying call to improve the lives of people living with dementia, their carers and their families by reinforcing the basic human right not to be treated differently because of a diagnosis.

The World Dementia Council has called on all countries to develop their Alzheimer’s Plans to respond to one of the most urgent health challenges facing the world today, one that is not solvable by any one country, organisation or individual alone.
Its 8 point Global Care Statement highlights the right to high quality, person-centred care and support for people living with dementia, their families and their care partners.

As dementia advances it can take with it a person’s ability to make informed choices about where and how they wish to be cared for. The reality is that too many people end up in residential care or nursing homes before they need to be there, or they end up staying in hospital beds for prolonged stays at enormous costs, says Jeremy.

If there’s the right support from properly trained caregivers who understand what it means for a person not just to live with dementia but to live well with dementia, there’s both dignity and empowerment. Even better if that care and support can be provided in a person’s own home, adds Paul. A person can be surrounded by reminiscence triggers from their own lifetime, rather than staged backdrops, receive care in the familiarity of their family home and stay part of their own community.

5. Be part of the Dementia Movement

When Alzheimer’s Society started its Dementia Friends programme in the UK, the goal was to get to 1 million friends. People said we were setting ourselves up to fail, says Jeremy. But the current friends tally stands at 2 million and is increasing by 30-40,000 a month. Meanwhile Paul’s organisation is equally committed to building dementia friendly communities across the world. In the UK, its caregivers undertake a bespoke City & Guilds qualification shaped by world-leading dementia academics. It cascades this knowledge down into communities in turn by providing free Family Dementia Workshops open to family members and people from the wider community as well as local businesses. And in the States, where Paul’s organisation began 23 years ago, it is a proud member of Dementia Friendly America.

Become part of the Dementia Movement on #WorldAlzheimersDay and start by sharing this piece.

*Research commissioned by Home Instead Senior Care UK. Figures are from YouGov Plc. Total sample size was 2044 adults. Fieldwork was undertaken between 15th – 18th January 2016. The survey was carried out online. The figures have been weighted and are representative of all GB adults (aged 18+). 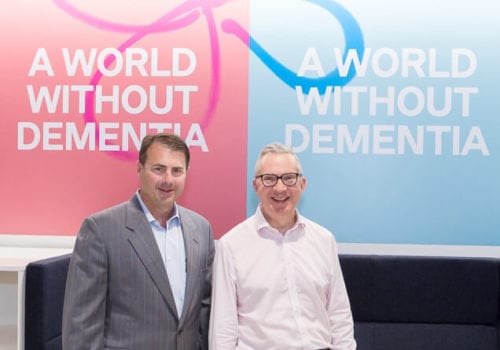