Chesterfield’s elderly paid their respects to those who fell in both world wars and later conflicts on Remembrance Sunday.

The residents of Barnfield Care Home all wore poppies with pride over the weekend commemorating the contribution of British and Commonwealth civilian and military service men and women.

The home, on Barnfield Close, took several residents to the nearby service at St Alban’s Church before attending the Holmewood war memorial to pay tribute.

One of those residents was 88-year-old Mary Coats, who has been a member of the Salvation Army for over 20 years.

Despite having dementia, Mary recalled her years of poppy selling and fundraising and picked up the home’s collection tin to carry on her former duties.

“All our residents, whether they were able to attend the service or not, were very proud to pay their respects by wearing their poppies.

“Several of the residents have memories from the World Wars and their aftermath, as the country rallied to rebuild.

“Many enjoyed sharing and reminiscing about those times as well as remembering family and friends lost in conflicts.” 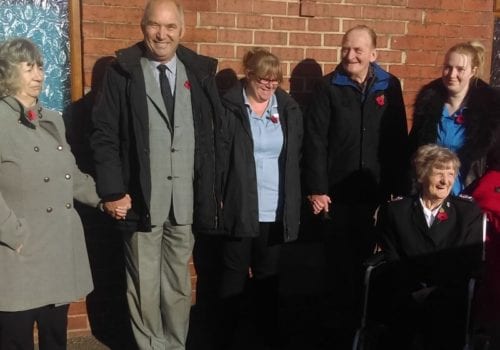