Frank captures nation’s hearts with a goal at Sheffield United

Well-being and Activities Coordinator, Michelle Ketland was tasked with asking each resident what their wish would be; a regular at Bramall Lane since he was a boy, Frank immediately said he’d always wanted to score for Sheffield United.

Michelle took on the challenge and set about making this happen for Frank, a Blades fan for over 80 years. With the support of his family she contacted Sheffield United who were keen to help and invited Frank along enjoy a match. They arranged for Frank and his daughter to have drinks in the director’s lounge before watching the game in front row seats.

At half time Frank was presented with a Sheffield United coat and shirt and was escorted out onto the pitch by Sheffield United legend Tony Currie. Tony kicked the ball to Frank ………..and he scored! 24,429 fans cheered whilst he blew kisses to the crowd.

The moment was captured and shared on Twitter, going viral with over 300,000 views. The story was picked up by the national and international press featuring in the Daily Mirror’s ‘Golden Oldie’ feature in October 2018 and on Sky Sport’s Soccer AM.

“We are very proud that our ‘Make a wish’ initiative has played a part in making this precious moment happen for Frank and his family. We are delighted too that he’s captured the hearts of the nation and thank the team at Sheffield United for making it happen” said Alykhan Kachra, Managing Director at Country Court Care.

Operations director at Sheffield United, Dave McCarthy, said: “We’re made up that he had the time of his life.

“Dementia is a horrible illness and we’re glad that we were able to provide even just a little bit of respite to Frank and his loved ones. Our fans were amazing too, giving ‘one of their own’ a lovely reception.” 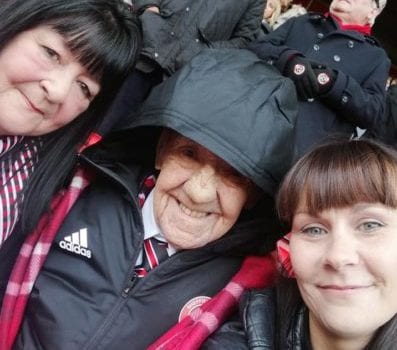