Gearing up for National Bike Week

A 62-year-old man who is tackling a gruelling cycling challenge for Dementia UK dropped into a Sanctuary Care home in Stepney to speak with residents about his climb.

Richard Burt is training to break cycling records for the national dementia charity by taking on Simon Warren’s ‘100 Greatest Cycling Climbs’ in just 12 days during August.

He is taking on the challenge on behalf of his mum Peggy, who has had Alzheimer’s for the past six years and is living with dementia in another of Sanctuary Care’s homes in Birmingham.

Keen to share his upcoming experience with other residents, the cycling enthusiast and Simon Warren himself visited Hawthorn Green Residential and Nursing Home in Redmans Road during national Bike Week 2016 (11-19 June) to share his thoughts on the mammoth task ahead.

Describing meeting the cycling pair and seeing a modern bike, 83-year-old resident Ron said: “It was great, I loved the bike – I told them both about my cycling days, I cycled a lot.”

To wish Richard luck on his pending training and challenge, the team and residents hosted a good luck high tea party for Richard, where the home adorned well-wishing banners and everyone enjoyed a sing along and mouth-watering cakes.

Sponsored by Sanctuary Care, Richard, who hopes to raise £50,000 for Dementia UK, said: “It’s so heart-warming to have so many people behind me, I love to hear how my challenge is personal to them – Dementia UK is a cause close to so many and this is why I’m doing it – it will be tough but will be worth it.”

Simon added: “Richard has a huge challenge on his hands but he has the determination to do it I’m sure of that, I just hope he has plenty of good maps as some of the climbs are very well hidden. I’m very proud that the little guide book for cyclists I complied is the inspiration behind the attempt to raise funds for such a worthy cause that may well affect most of us in one way or another during our lives. Good luck Richard!”

The Sanctuary Care home’s manager Cathy McAweaney said: “We were delighted to have Richard and Simon visit us for national Bike Week 2016, Dementia UK is a cause very close to our hearts so we are pleased we were able to show our support – and the residents loved seeing the bike, they kept commenting how it’s changed a lot since their day.”

Richard’s motivation for his cycling challenge comes from a heart-breaking discovery he and his family faced before Peggy moved into a care home. He reached out for Admiral Nurse care for vital support but discovered vital funding had been withdrawn and this is why Richard wants to raise funds for Dementia UK, to help the charity grow their Admiral Nurse network for future families – Admiral Nurses provide expert practical and emotional care and support for family carers, as well as the person with dementia.

To donate or for regular updates, visit Richard’s Virgin Money Giving page or www.sanctuary-care.co.uk/100-greatest-cycling-climbs or show your support by tweeting a cycling picture with the hashtag #CyclingwithRichard. 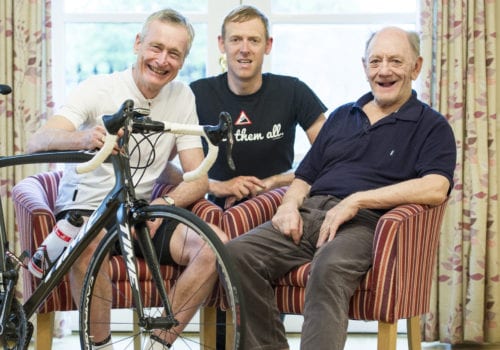