From humble beginnings in Kingswood Road, Gillingham, The Abbeyfield Kent Society has grown to become the biggest independent Abbeyfield in the world. In May, it celebrated its 50th anniversary.

Accompanied by Chairman, Zach Miles and Conservative Parliamentary candidate for Gillingham, Rehman Chishti, residents of the Wigmore residential home got together to celebrate 50 years of the Society’s presence in Kent.

Residents and their guests gathered in the dining room, which had been adorned with flags, bunting and balloons, ready for an afternoon of celebrating. Live entertainment was provided by Pearly King and Queen, which was followed by an Abba tribute act, who ensured all the residents and staff got into the spirit and enjoyed themselves.

Partygoers sang along to the nostalgic songs of their past, whilst some chose to get up and dance too. After the entertainment, residents settled down to their fish and chip lunch.

Lucy Dixon, home manager of Rogers House commented: “Our celebration was a great success, lots of staff came along and some of the residents’ relatives joined us too, so it was a real community event! The residents loved the live entertainment and spent all afternoon nattering with one another about what they were doing in the 60s!”

Kent got its first Abbeyfield home in 1967, when Rev Tom Rogers noticed that older people in the area were lonely and in need of care. From that first small house in Kingswood Road, the Society continued to grow over the years and in 1992, Rogers House opened in Gillingham, it was the first residential care home in the county to provide 24-hour care and compassion. 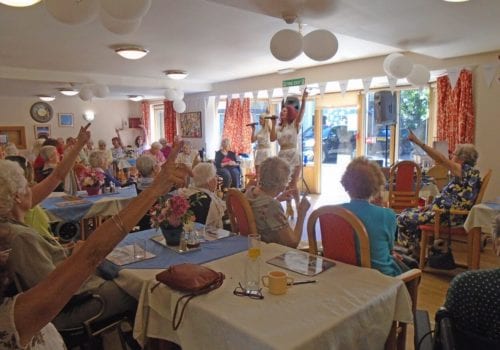