Accompanied by staff of the home, the group of Trinity Road residents paid their respects and attended the service in and around the town centre, which consisted of a parade and wreath laying, as well as music from the Salvation Army Band and the Port of London Authority Choir.

There was also a knitted carpet of poppies on display, to mark those who fought for our freedom during the two World Wars, as well as signifying those who have lost their lives in more recent conflicts.

Following the service, the residents made their way to the nearby Woodville Halls, to warm up with refreshments, they were delighted to meet the Mayor of Gravesham, Councillor Greta Goatley, who was happy to stop to chat and take photos with them.

Chris Hutchinson, home manager of Edward Moore House said: “Whilst Remembrance Day is meaningful and significant to the entire nation, it is even more so for a great deal of our residents, many of whom lost loved ones during the wars.

“The group of residents were delighted to be able to attend the service and show their respect, remembering the fallen on such an important day.” 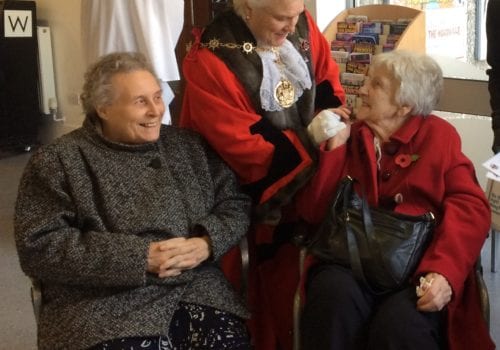