A young reporter from Chelmsford, has scooped the runner-up award in the Innovative Film category of the Haelo Film Festival 2017, which showcases the outstanding and original public sector films from across the UK.

Harriet’s film “What on earth is a Vanguard”, produced by Healthwatch Essex, was shortlisted alongside contributions from Rape Crisis Scotland and Lancashire Teaching Hospitals NHS Foundation Trust, who won with their “24 hours in maternity care” film.

The concept behind Healthwatch Harriet and her ‘What on earth..’ films is very simple – if you can explain it to a 10-year-old, you can explain it to anyone. Harriet interviews a range of heavy-hitters in the world of health and social care, and with her ‘no nonsense’ approach, forces them to simplify their language to help everyone understand what might otherwise be tricky issues to communicate.

Referred to as a ‘mini Paxman’, Harriet is delighted to have gained this recognition. “It’s important to know what’s really going on and my mission is to find out!”

The film is also up for the public vote for the www.charityfilmawards.com 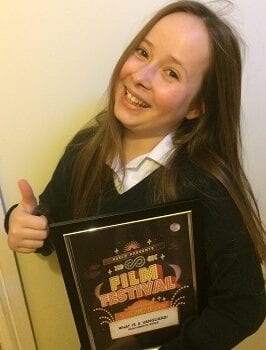