A nonagenarian care home resident has become an internet singing sensation after thousands of social media users watched her performance.

99-year-old Matilda Fleming, who prefers Hilda, spontaneously burst into a rendition of First World War era song “Pack Up Your Troubles In Your Own Kit Bag”.

She was taking part in an arts and crafts session with fellow residents Vernon Henry, 96, and Joyce Healey, 88, who both took her lead and joined in the singalong.

Staff at Aaron Court Care Home, on Princes Road, Ellesmere Port, were stunned by when they started singing and managed to catch it on a smartphone.

With permission from Hilda’s family, they uploaded the film to Facebook, where she has since had over 15,000 views.

Lindsey Bevan, home manager at Aaron Court Care Home, said: “We were told singing was Hilda’s passion, but we hadn’t heard her sing before.

“During the arts and crafts session, she was reminiscing with fellow residents, and then suddenly started reciting Pack Up Your Troubles.

“Both Vernon and Joyce then joined in. It was such a lovely moment. We’re so pleased it was caught on camera so we could share it. The clip has had a huge response on Facebook.”

Hilda was born in Liverpool in 1919 before moving to Ellsemere Port later in life. She will celebrate her 100th birthday on Friday, 19th April, when Aaron Court Care Home will host a special celebration.

The home would like to give Hilda 100 birthday cards to mark her 100th birthday and is appealing for donations.

Lindsey said: “We’re appealing to anyone who would like to send Hilda a birthday card to mark her 100th birthday.

Anyone who would like to send a birthday card to mark Hilda’s 100th birthday on 19th April should address it to Matilda Fleming, Aaron Court Care Home, 190 Princes Road, Ellesmere Port, Cheshire, CH65 8EU. 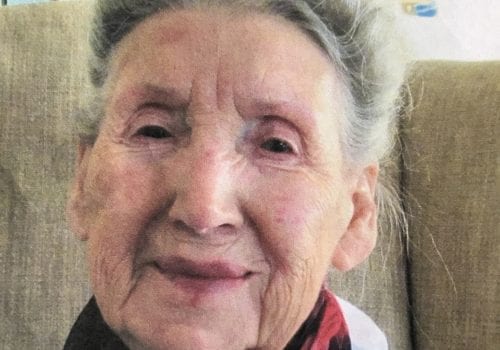