MHA receives award for its end of life care

MHA’s Chaplaincy team has been awarded the 3rd Sector Care award for its work on end of life care.

The charity’s approach to end of life care is encapsulated in its specially-designed programme called The Final Lap which aims to make sure all its care homes are places where death and dying are faced openly, positively and with support.

The programme was implemented long before various Government initiatives to improve end of life care. MHA’s approach and resources have been shared with organisations nationally and internationally to promote excellence in end of life care.

The Chaplaincy service in all MHA’s homes has been the key to opening conversations with residents and relatives, as Director of Chaplaincy and Spirituality Chris Swift explained.

“MHA differs from other care providers in offering a Chaplaincy service in all its care homes, as we believe the spiritual wellbeing of our residents is as important as their physical and mental wellbeing,” he said.

“They provide a source of counsel to residents and relatives, creating a culture of care and openness right from when a resident moves into one of our homes. This means that the last wishes of our residents can be easily articulated, clearly recorded and observed with the utmost respect and dignity as the Chaplains work closely with the team at the home.”

The programme was developed by MHA’s former Director of Chaplaincy and Spirituality Keith Albans. He said: “I was delighted to have joined my former team of Chaplains in receiving the award.

“This is a subject that, for a long time, no one has wanted to talk about. When I joined MHA in 2001, we used to deal with it in a rather formulaic way. The work I was involved with showed how important it is and how liberating it can be if you can talk about dying and death openly and positively. This is what The Final Lap enables us to do.” 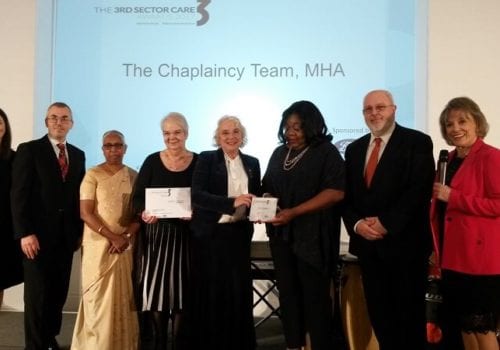