A national charity has today released easy-read practice ballot papers as part of a wider campaign to help make voting easier and more accessible to everyone ahead of next week’s local elections.

Learning disability charity United Response has this spring partnered with the Cabinet Office and Electoral Commission to produce the practice voting slips for the upcoming Mayor of London, London Assembly, Combined Authority and local elections on Thursday 6 May.

The ballot papers, available to view and print today from the United Response website, provide a sample practice slip and use simple language and images to explain the voting process in easy-to-follow steps. They also outline what each election is for and how local politics can play a huge part in people’s everyday life.

The simplified ballot papers are released today after United Response last month ran the UK’s first-ever Accessible Voting Day, which shone a light on the challenges many people face when voting.

The charity, known for also producing easy-read news and election manifestos, called on other organisations and sectors to help push for wider societal efforts to make the voting process easier, and more appealing, to marginalised people – such as those with learning disabilities.

Poor accessibility a barrier to an inclusive electoral process

Using a survey of more than 2,000 people in the UK, United Response highlighted how poor accessibility can be a distinct barrier to a truly inclusive electoral process. The charity is continuing to promote the rights of people with disabilities and empower them to take part in politics and vote.

Voter Seb, who is supported by United Response in Suffolk, added: “Voting is confusing for many people and the cards [ballot papers] are difficult to understand, for example, if you have a learning disability and want to vote by yourself. There are different people in communities and they need different things. Things should be in easy read for everybody.”

“Voting should be accessible to everyone, irrespective of their disability or the challenges they face. Sadly this is just not the case but our easy-read and accessible resources are hoping to help change that…

“Care providers like ourselves have a huge role to play but more must be done in society to break down barriers and help create a truly inclusive world – one where every one of its citizens can help shape the decisions which affect their daily lives.” 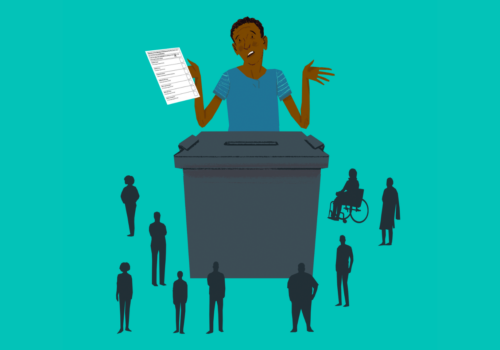