No Mountain Too High For Care Home On Fundraising Mission

Staff from Banstead-based maritime charity, the Royal Alfred Seafarers’ Society, are aiming to raise at least £4,000 in support of maritime charity Seafarers UK by competing in the charity’s 24 Peaks Challenge.

The team of caring and estates staff from the Society’s specialist maritime nursing home, Belvedere House, has been preparing for months to compete in one of the nation’s most gruelling challenges in support of national maritime charity Seafarers UK, which has been helping people in the maritime community for a century.

Competitors in this year’s challenge will have 24 hours to scale 24 peaks, covering 31 miles across the Lake District and climbing some of the highest mountains in England, including Scafell Pike. The Royal Alfred Seafarers’ Society was one of six teams out of 24 to complete the challenge last year and are hoping to top the £4,300 they raised in 2016.

This will be Estate Manager Richard Condie’s second time competing, with Nick Potroanchenu from maintenance and Kim Tema, a Care Assistant, tackling the challenge for a third year in a row. Newcomers Jenny Tema and Roberto Iannella will be competing for the first time and the team has been training in the lead-up to the event by walking, running and going to the gym, with plans to train at Box Hill in Surrey over the next two months.

The Royal Alfred Seafarers’ Society receives support from the charity, which helps the home provide housing, residential and nursing care to former seafarers, their widows and dependants, which it has done for more than 150 years. These services include nursing, support, respite and dementia care, all onsite at its estate in Surrey.

The home has already hosted a number of fundraising events including a quiz night, and has raised more than £1,000 so far.

Commander Brian Boxall-Hunt, Chief Executive of Royal Alfred Seafarers’ Society, said: “This is the third year in a row we have entered a team for this gruelling yet rewarding challenge and we are encouraging people to donate to a charity that has done so much for the maritime community. We wouldn’t be able to provide our residents with the level of care we do if it weren’t for organisations such as Seafarers UK, who continue to support us and our mission to provide seafarers with a safe haven in old age, illness or adversity.

Seafarers UK gave more than £2.5 million in grants in 2016 to 72 maritime welfare charities, providing vital support to 170,000 people across the Royal Navy, Royal Marines, Merchant Navy and Fishing Fleets. The charity receives no government funding and is heavily dependent on public donations and legacies to maintain its grant-making programme.

To donate to the fundraising team, visit justgiving.com/fundraising/RASS1865.

No Mountain Too High For Care Home On Fundraising Mission » 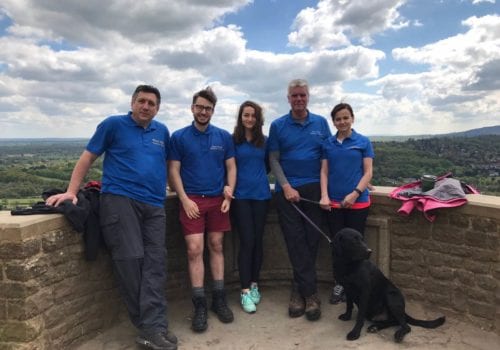