The Old Vicarage care home in Allithwaite posted photos of its night staff wearing pyjamas and dressing gowns to help remind residents with dementia who wake during the night that it’s bedtime.

The Facebook post, of care assistants Janet Cartwright and Brenda Kerr carrying out their care duties, had a fab reaction on social media, receiving more than 400,000 likes, being shared almost 240,000 times, receiving 50,000 comments, and reaching a total of 13 million people.

“We never dreamt the post would be so popular,” said Charlotte Gregson, home manager at The Old Vicarage, who is responsible for the bedtime initiative.

“None of our care staff, including myself, wear uniforms. We feel that uniforms separate us, they are a symbol of power and control, and represent ‘doing a job’, whereas we want our residents to feel special, loved, and at home.

“Many of our residents are living with dementia and when they wake during the night it can be confusing to see lots of activity. By going about their work in pyjamas and dressing gowns, our night staff are helping to remind residents that it’s time for bed.

“It’s an idea that seems to have captured everyone’s hearts. We’ve had thousands of comments and messages from people who think it’s an amazing idea and praising us for our person-centred care. ”

“Other comments are from care workers who want to adopt the idea in their place of work. It would be marvellous to think that a post about our pyjama-wearing team might actually spark a change in how care homes across the UK support their dementia residents.”

The care home encouraged people to share the post to help fund a dementia-embracing community orchestra, a new project soon to be set up by Dignity in Dementia.

Kamal Siddiqi, owner of The Old Vicarage, offered to donate 50p to the project for every post share, and agreed a limit of £200 with Dignity in Dementia, a social enterprise that runs a range of dementia embracing community groups locally and offers free dementia training and other services to families.

“We never dreamt it would fire the imagination of so many people,” said Kamal, “we were completely blown away by how quickly the post went viral”

Since the care home encouraged its followers to donate to help fund the community orchestra, the organisation has received almost £1,500 in donations.

Lesley Gill, director of Dignity in Dementia, added: “We’ve been taken aback by people’s generosity, with donations ranging from 50p to £200. We can’t thank Kamal and The Old Vicarage enough for helping us turn our idea into a reality.”

To make a donation to Dignity in Dementia visit ww.dignityindementia.org/donate/

We salute you, Captain Glass » 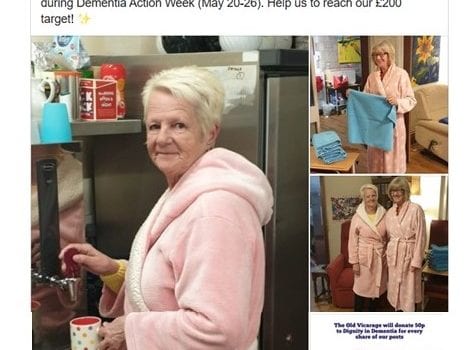