Two service users at Trinity House in Lockerbie, part of the Danshell Group, have celebrated success with a trio of medals at the Special Olympics.

After lots of training and preparation, Richard and Nigel competed in the major national games in Sheffield, the largest event of its kind in the country. They took part in the 100 metres sprint, standing long jump and shot put, alongside many other talented athletes from the 2,700 who came to compete.

Both performed exceptionally and achieved their goals; Richard won a silver medal in the 100 metres against stiff competition, and Nigel was extremely proud of himself for winning gold in the standing long jump and a bronze medal, along with a personal best, in the shot put.

They were supported at the Special Olympics by Trinity House’s Activity Coordinator Lorraine Platt and Senior General Assistant John Beattie.

Trinity House supports adults with a learning disability and complex needs within a homely, person-centred environment.

Kirsty Dale, Service Manager at Trinity House, said: “This was a huge accomplishment for Richard and Nigel and everyone at Trinity House is very proud of their achievements. To win three medals between them is fantastic.

“Making sure that the people we support live as independent and fulfilling lives as possible is the most important thing we can do. A huge part of this is enabling people to set their own goals and achieve them, as Richard and Nigel have done.”

« NHS pay rise must be matched in the independent sector – warning 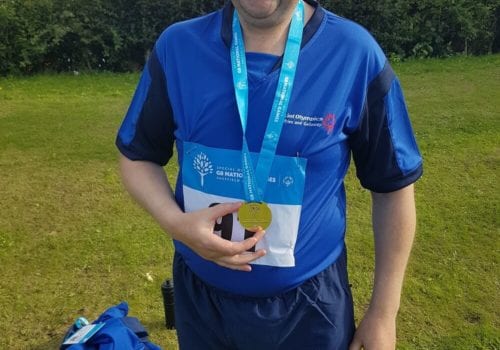