Working with the National Citizen Service as part of a social action project, a group of 13 school leavers have been busy fundraising and volunteering at Abbeyfield Kent’s two Gravesend care homes.

The four-week project has seen the group of 16-17 year olds, who come from Gravesend, Dartford and beyond, raising money for Dementia UK and volunteering at Edward Moore House and Dene Holm, the Society’s two Gravesend care homes.

The group were busy weeding, trimming hedges and trees, painting fences and decking and carrying out general maintenance on the home’s gardens in a bid to improve the outside space for the residents of the home. They also left some of the tools they used behind, so they can continue to maintain the grounds.

Sixteen-year-old Zach Best, who leads the group, commented: “I suggested supporting people with dementia as I wanted to bridge the gap between older and younger people. My great granddad had dementia and lived in a care home and a few others in the group have been affected by it too, so we wanted to do our bit and make a difference.”

Chris Hutchinson, home manager of Dene Holm and Edward Moore House said: “We are very grateful for the support of the volunteers, they did a wonderful job and it was very kind of them to provide us with some garden tools, some of which we were lacking before!

“Dementia affects a huge number of people, so it’s fantastic that the students were keen to learn more and support older people living with the condition.”

The group of volunteers would like to thank the National Citizen Service and Charlton Athletics. 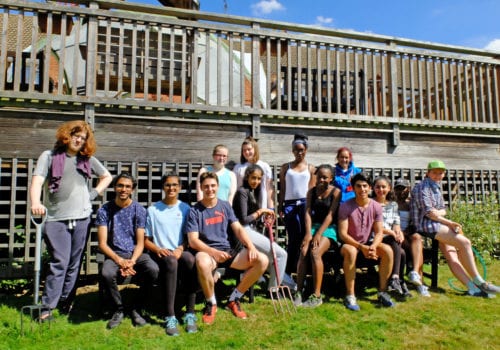