From humble beginnings in Kingswood Road, Gillingham, The Abbeyfield Kent Society has grown to become the biggest independent Abbeyfield in the world. Last week, it celebrated its 50th anniversary.

Residents of St Mary’s, the Society’s supported home in Riverhead, got together to celebrate 50 years of The Abbeyfield Kent Society, with a coffee morning on Saturday 20th May.

Residents, their relatives, neighbours and volunteers, were joined by friends of the home and the Society’s Chief Executive, Leon Steer, for a morning of coffee, cake and commemorating.

Tucking into the various delicacies on offer, residents and their guests chatted about the history of the Society and in particular, its presence in Sevenoaks. A special cake had also been made, which was cut by resident, Rose Wheatley, to mark the occasion.

Kent got its first Abbeyfield home in 1967, when Rev Tom Rogers noticed that older people in the area were lonely and in need of care. From that first small house in Kingswood Road, the Society continued to grow over the years and in 1992, Rogers House opened in Gillingham, it was the first residential care home in the county to provide 24-hour care and compassion. 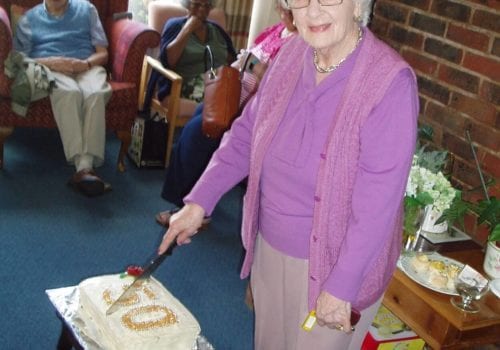