The ‘two carers in a car’ programme, launched by the Prestige Nursing + Care Shrewsbury branch in July 2017 provides support to households in Shrewsbury, Oswestry, Market Drayton and Ludlow, between 10pm-7am. This support includes assistance for:

Two carers in a car was launched to alleviate the pressures on night sit services and to meet people’s night time needs without exceeding them.

Prior to the launch, Shropshire Council found that carers were being asked to provide 24-hour residential care, or a full night’s domiciliary care support – despite the carer only required to give a few hours of support during the night. Two carers in a car was designed to fix this issue.

Working with Prestige Nursing + Care, a team of eight care Assistants is on call each night.

Referrals can come from hospitals, accident and emergency, out of hours Doctors service emergency duty teams, social care practitioners, district nurses, or GP’s. In order to keep costs down the carer team are able to take referrals directly throughout the night via secure email to their smart phone, so the referrals can come to the office in the day and to the carers in the night. Since launch the scheme supports an average of 23 people each night. At its peak it has made 200 visits in a week.

Two carers in a car is a fantastic initiative and has delivered real benefits to the local community.

“I am absolutely delighted that our Two Carers in a Car project has been shortlisted for this prestigious award. This new and innovative project is one of many that we are trialling to look at how we help prevent people from requiring hospital or GP intervention and to ensure they remain independent in their homes for longer.

“I wish the team all the best at the finals.”

Following the successful pilot of two carers in a car between Shropshire Council and Prestige Nursing + Care in 2017, provider Care of Excellence joined the scheme in 2018.

The Awards are held on 13 March at London’s Grosvenor House. 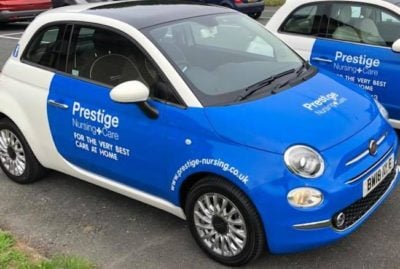