Today marks the final day of the annual Road Worlds for Seniors competition, an initiative to motivate older people to engage with physical activity.

Motitech, the Norwegian startup, is now in its fifth consecutive year of running the event and has welcomed its biggest ever number of competitors from around the world.

The annual Road Worlds for Seniors competition, which took place from September 6th to October 1st, 2021, encourages elderly people to engage in competitive exercise. It has been designed to remind the world that anyone can be an athlete, regardless of age, while promoting the benefits of physical exercise for ageing people.

During the championship, participants compete using Motitech’s video tool, Motiview, to cycle through a choice of over 2000 locations from around the world using specially adapted bikes, via a video projection that plays whilst they pedal (with hands or feet, depending on mobility).

Documented health benefits of using Motiview, according to the company, include increased mobility and self-efficiency, improved strength and balance leading to a reduction in falls, improved social interaction and improved physical and mental wellbeing. These come in addition to an improved quality of life, increased confidence, and faster rehabilitation. Notably, the benefits of Motiview are especially beneficial for those who live with dementia, as it provokes memories of familiar locations, such as a hometown or past holiday location, sparking conversations that bring the memories back to life.

To date, care homes from the United Kingdom, Australia, Israel, Canada, Sweden, Denmark, Norway, Finland, Switzerland, Singapore, and Iceland have signed up to compete, with more than 250 teams getting back in the saddle come September 6th, 2021, making this year’s competition the biggest to date. Every person that participates will be rewarded for their efforts, with additional awards going to the individual man and woman that have cycled the furthest as well as team class and the care teams that have provided the best support.

Last year’s competition saw over 100 teams from more than seven countries around the world taking part and competing with winners including Norway’s own Furuset Seniors entered, who covered a whopping 16,260 km collectively closely followed by teams in Iceland and Australia. Most impressively, five cyclists in the men’s class covered more than 3200 km, with Canadian Norman Cote at the top at the finish line. In the women’s class, four cyclists covered more than 1200 km with Catta Myhr at the top with 4100 km.

‘As Road Worlds for Seniors enters its fifth consecutive year, we are seeing more competitors than ever from around the world taking part. I am continuously blown away by the work, commitment, and enthusiasm shown not only by the cyclists – some of whom are over 100 years old – but by the amazing volunteers and practitioners supporting those taking part. We are excited to see what achievements this year’s cohort of international competitors will make, and we look forward to cheering on our brilliant competitors throughout the month of September.’

Jan Inge Ebbesvik, President of the Road Worlds for Seniors 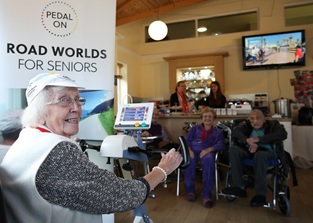