Volunteers across Birmingham have been rewarded for the work they are doing to battle the “lingering sadness of loneliness” across the city.

Citizens at the heart of Ageing Better in Birmingham, a programme set up to tackle isolation in the over 50s, have received awards recognising their “hard work and dedication” in setting up activities and supporting older people.

Stephen Raybould, Ageing Better in Birmingham Programme Director, said: “The lingering sadness of loneliness can be a cruel and crippling feeling, which affects more people than we realise. Never underestimate the power of human contact and how many people may not have that day to day. To have all these volunteers recognise the importance of helping others who feel alone and working hard to tackle loneliness Birmingham is overwhelming.

“All of our volunteers have gone above and beyond in their communities. Their hard work and dedication is truly commendable and I would like to take this opportunity to say a big thank you to everyone involved. This is a great opportunity to recognise individuals for everything they have done for the lonely people of the city.”

People who have been supported through Ageing Better in Birmingham were asked to nominate their activity or lead volunteer for an Ageing Better Award in the following categories:

STEP ON! Highgate, an arts based activity programme for the over 50s, run by Birmingham Centre for Arts Therapies (BCAT), picked up the Ageing Better Award for Innovation.

The group was recognised for successfully launching a new activity that older people would not typically access – and run sessions that saw attendees dance to Michael Jackson’s Thriller and enjoy a trip to the Edwardian tea rooms.

Richard Mole Project Manager for BCAT said: “Receiving recognition for community work is always a pleasure. We were therefore delighted that STEP ON! Highgate picked up an award for Innovation from the Ageing Better Fund.”

Brian Bird, from the Feel Good Theatre Group, was handed the Taking the Lead Award for organising trips to the Highbury Theatre in Sheffield Road, Sutton Coldfield, which he is president of.

The 92-year-old said: “I was flabbergasted to receive the award. I have been a member of the Highbury Theatre since 1942 and I am delighted to have been able to organise trips for others like myself to enable them to enjoy the theatre.”

Phillipa England, 42, a development worker at St Martins Church, Witton Lodge, said: “Brian is absolutely fantastic and instrumental to the success of the group. He liased with the theatre, distributed programmes, helped show people to their seats and was always the last one there to ensure everyone got home ok.”

The Sunshine Womens Group scooped The Reaching the Hard to Reach Award for its work in trying different approaches to reaching out to isolated people and encouraging them to join in.

The Women of Destiny Ministries Widows Forum was handed the Older People’s Voices Award for ensuring the experiences of older people are at the heart of what they do by making sure participants feel able to join in.

The Sherron Garden Lunch Club in Sparkbrook, scooped the Ageing Better National Evaluation Award for collecting the most feedback from participants. 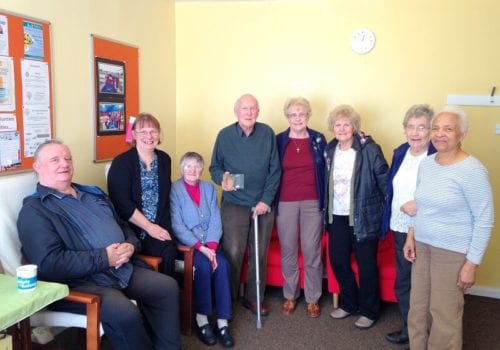