Residents of Watling Court have been keeping busy by knitting tiny hats for Innocent Smoothies, as part of their ongoing fundraising project for Age UK.

Between them, the keen knitters have made hundreds of hats for the fundraiser; so the residents were over the moon when a representative from Innocent Smoothies visited them at the Gravesend extra care housing scheme last week.

The representative presented the group with their very own ‘star knitters’ certificate, as a thank you for their commitment to the cause in donating so many hats.

Helen Goulding, Housing Officer at Watling Court said: “The residents had great fun joining The Big Knit challenge, they all love knitting anyway but being able to do so whilst giving back to the community and helping others, they’ all found really enjoyable.”

The Big Knit launched in 2003 when Innocent started putting cute little hats on their smoothies and donating 25p from every bottle sold to Age UK. The wooly creations are knitted and crocheted by thousands of volunteers every year and last year the company received 1.5 million hats, bringing the total raised or Age UK over the years to just under £3 million. 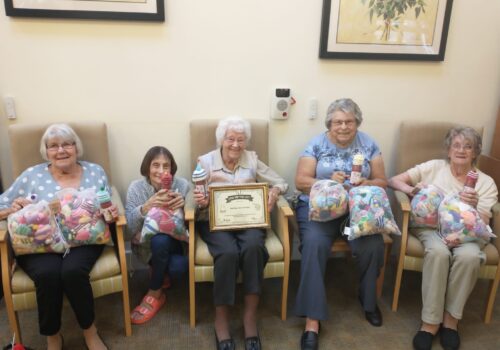