We salute you, Captain Glass

After a decade at the helm as Chairman of Trustees of Surrey-based maritime charity, The Royal Alfred Seafarers’ Society, Captain Duncan Glass has announced his retirement.

Captain Glass started his journey with The Royal Alfred 16 years ago when he became a Trustee for the charity, before being appointed as Vice-Chair in 2007 and then Chairman in 2009. Captain Glass was succeeded by Lieutenant Commander Philip Wake RNR, last month when the Chairmanship was handed over at the Society’s Annual General Meeting on 16 May.

The Royal Alfred Seafarers’ Society is a registered charity and was established in 1865, providing nursing, dementia, residential and respite care to retired seafarers and residents of non-seafaring backgrounds from across the UK.

As Chairman of Trustees, Captain Glass was pivotal in overseeing the smooth running of The Royal Alfred Seafarers’ Society. His role included governing the Society and ensuring an effective stream of income for the organisation, enabling the charity’s Belvedere House care home to operate at the very highest standard, delivering care to more than 65 residents and tenants.

Captain Glass has spent more than 45 years in, or associated with, the Merchant Navy and has been passionate about ensuring the safety and care of former seafarers through his work at the Society.

During his time at The Royal Alfred, Captain Glass has been very supportive of the Society’s modernisation and his support for CEO Brian Boxall-Hunt and the Senior Management Team allowed them to work together to provide an outstanding level of care for all residents. Key to this was Captain Glass’ ability to help gain grants and funding from organisations to ensure the charity could develop the home and grounds.

This included several ambitious regeneration and construction projects including building a dedicated dementia annexe to provide specialised care for 36 residents. His Chairmanship also saw the landscaping of the Society’s extensive grounds, including the recent completion of two interlinked ponds on its north field site to connect residents to their seafaring past and for all staff, tenants and family members to enjoy.

Captain Glass said: “It only seems like yesterday I accepted the Chairmanship at The Royal Alfred Seafarers’ Society. It has been a pleasure to oversee the progress of the charity for the past decade and watching the development of our outstanding care home into something the residents can be proud to call home.

“From facilitating royal visits including those of our Patron HRH Princess Anne, to opening our north field ponds, maritime lounge and dementia annexe, I’m proud of what we have collectively achieved during my time as Chairman of the Board of Management.

“I wish my successor, Lieutenant Commander Philip Wake, and the Society every success for the future and will be keeping in touch with my esteemed colleagues, friends and residents at this wonderful charity!”

Commander Brian Boxall Hunt, CEO of Royal Alfred, said: “We are incredibly sad to be parting ways with Captain Glass and his support in bringing our care home such success cannot be understated. Over his ten years as Chairman of Trustees at The Royal Alfred, he has always actively helped and encouraged us to deliver the best possible standard of care for our residents and tenants. He has also brought the right balance to the Society’s governance, allowing the charity to grow and develop further.

“While he will be missed by all at the Society, we welcome incoming Chairman Phillip Wake and look forward to working with him to continuously improve our Society and care home for all that is connected with it.”

Alongside Captain Glass’ contributions to The Royal Alfred, his achievements have also been recognised across the industry. In 2010, he was awarded the Merchant Navy Medal for exceptional services to navigational safety and seafarers’ charities – an award that focuses on outstanding contributions made to merchant shipping, its operations, development, personnel, welfare or safety, or on those who have performed an act of courage afloat. This was joined by a well deserved O.B.E.

He also won the Beyond Governance Award at the most recent 3rd Sector Care Awards for ‘demonstrating an outstanding and sustainable contribution to The Royal Alfred’.

Nominations for the 2019 Markel 3rd Sector Care Awards open tomorrow, 14th June 2019. You can find out more about the awards and make your nomination here: https://www.caremanagementmatters.co.uk/3rd-sector-care-awards/ 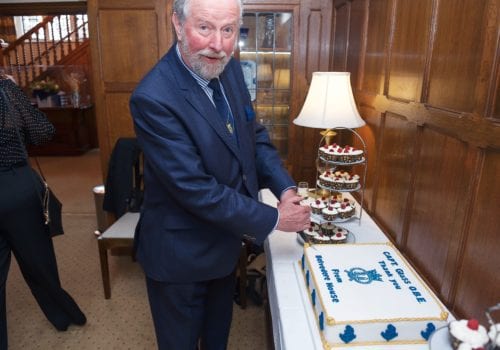